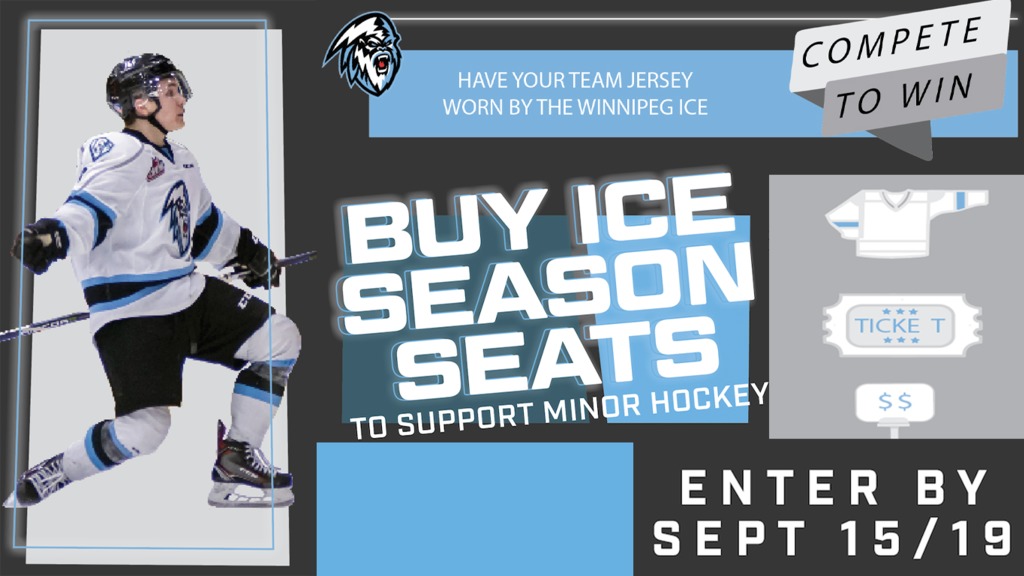 Winnipeg, MB – As part of its commitment to supporting Winnipeg grassroots hockey, the Winnipeg ICE will be wearing the jersey design of a Hockey Winnipeg Association during the 2019-2020 regular season!

“We are thrilled to launch this initiative and begin what will be an incredible partnership with Hockey Winnipeg,” explained ICE Vice President Raylin Kirsch. “The Winnipeg ICE and its parent company 50 Below Sports + Entertainment are dedicated to giving back to grassroots hockey and we feel this is a tremendous start.”

Kirsch added, “We are very pleased that each Winnipeg minor hockey association will benefit from this initiative directly. The ICE will donate $25 back to the member’s home association for every season seat membership purchased through this initiative.”

HOW DOES THE MINOR HOCKEY JERSEY INITIATIVE WORK:

Each association’s members will work together to refer the most season seat memberships for the 2019-2020 Winnipeg ICE regular season. The winning association will have the opportunity to have their jersey worn by the ICE during Minor Hockey Night on November 30, as well as receive all of the net proceeds from the game-worn themed jersey auction.

It’s not just the winning association that will benefit from this initiative. For each qualifying referral made, the ICE will donate $25 back to the association who made the referral.

This initiative closes on September 15. The winning association will be announced the week after the initiative ends.

ALL PATRONS WHO PURCHASE A SEASON SEAT MEMBERSHIP(S) THROUGH THIS INITIATIVE RECEIVE ADDED BENEFITS:

To qualify to receive the benefits of this initiative and to help your Hockey Winnipeg association win the grand prize, those purchasing memberships must do so by September 15.  Memberships can be purchased online at winnipegICE.ca and patrons must enter the association’s name at checkout. After selecting a seat(s) and proceeding to checkout, a pop up box will appear that says: “Did someone refer you to purchase Winnipeg ICE season seats? If so, please provide their name or group name.” This is where the individual will provide the association’s name (ie. Assiniboine Park Minor Hockey Association) and submit.

The Winnipeg ICE are one of 22 member clubs in the Western Hockey League (WHL).  The WHL is regarded as the world’s finest development league for junior hockey players and has been a leading supplier of talent for the National Hockey League for over 50 years.  Founded in 1998, the ICE franchise won the WHL Championship (ED Chynoweth Cup) in 2000, 2002 and 2011. In 2002, the ICE won the Memorial Cup. Since the ICE’s first season in 1998, 39 alumni have played in the NHL.