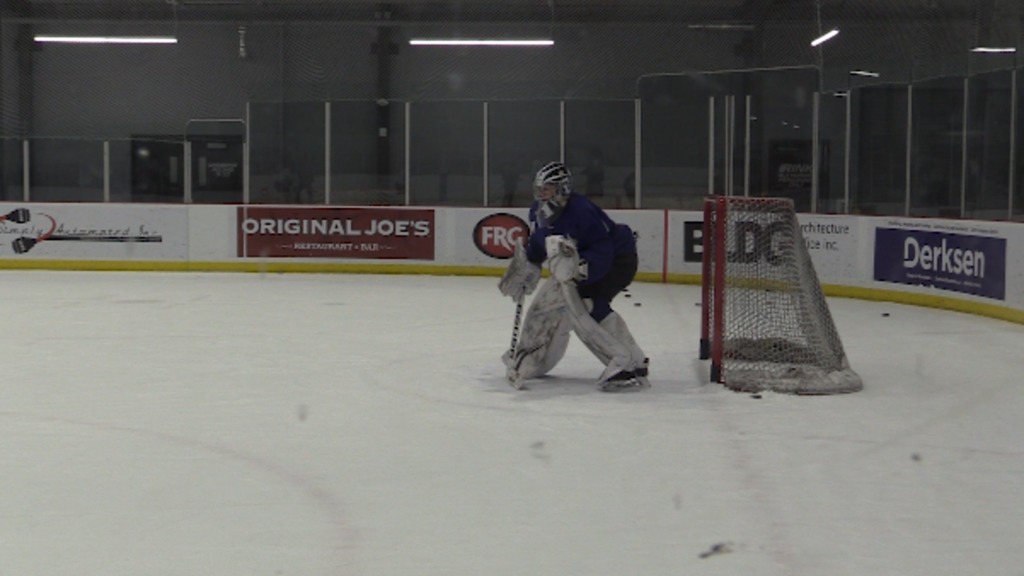 It’s back on the bus for the Winnipeg ICE Today.

An early morning start all part of the plan to get the team to Medicine Hat in time for supper and a good night’s rest ahead of the first meeting of the season with the Tigers.

While some may not be too excited by the idea of a long day on the highway, goalie Jesse Makaj is all smiles.

The second-year goalie is back where he wants to be after a bout of mononucleosis delayed his start to the season.

Makaj put in a good summer of work with every intention of a strong training camp to build on last season’s heavy load in the ICE crease. But, things went in another direction, frustrated by a sore throat three days before camp, he found out he was dealing with an illness that could set him back for quite some time.

A positive attitude, the support of family, friends, and the hockey club, and a little luck helped him cope and saw things turn for the better in about a month’s time.

Now after about three weeks of practicing and nearly two weeks of facing shots, he’s set to take the next step after making 39 appearances last year with the ICE.

“I feel back to normal. I feel like I haven’t lost anything. In a way I almost feel better because I’ve been able to work on small details and just clear those up. So, yeah, I’m ready to play.”

And Makaj doesn’t just want to tag along, he’s set his sights on being a difference maker for a team he says is much improved.

“I believe I’m the guy for this team. I want to help this team make playoffs and go on a good run. We have a really good group here, a lot more mature than last year.”

The ICE are off to a 3-3-1-0 start, including 3-0-1-0 on the road a trend Makaj hopes continues as he readies for a return to action possibly as soon as tomorrow in Medicine Hat against the Tigers (8:30 p.m. Central, cjob.com) or Saturday in Swift Current versus the  Broncos (8 p.m. Central, 680 CJOB).