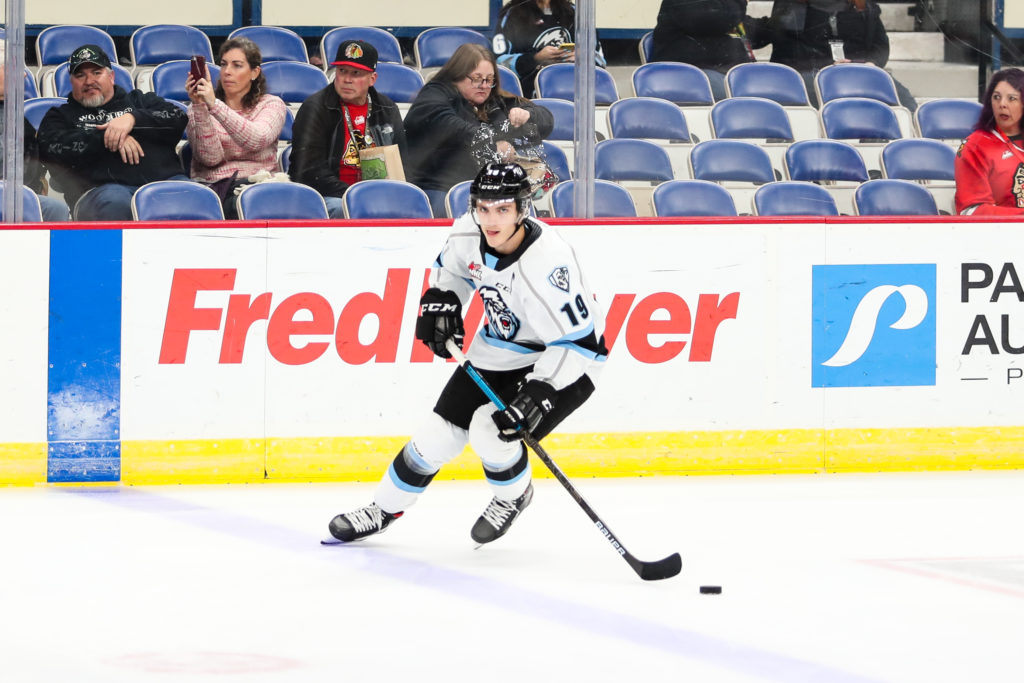 The Winnipeg ICE were all about preparation this morning at The RINK Training Centre as they geared up for the Swift Current Broncos, tomorrow’s opponent in game two of this five-game home stand.

It’s an important game for the ICE because they can move into second in the East Division with a victory. Winnipeg is currently one point back of the Saskatoon Blades, but Wednesday’s contest is one of three games in hand the ICE have on the team just in front of them.

The ICE are 2-0-0-0 against the Central Division’s sixth-place team this season and are determined to go three-for-three after the 7:30 p.m. faceoff at the ICE Cave inside Wayne Fleming Arena.

Speaking of threes, with today’s news that forwards Nino Kinder (Germany) and Michal Teply (Czech Republic) have been invited to the selection camps for their national junior teams ahead of the upcoming IIHF World Junior Championship, the ICE now have three players in contention to compete in the globe’s top under-20 tournament.

ICE Captain Peyton Krebs was named to the group of invitees revealed by Hockey Canada yesterday facing off the news of a hat-trick of talented forwards from the local Western Hockey League team who’ve earned international opportunities.

“It was amazing,” said Krebs of getting the call to try-out.“This year’s been a lot of ups-and-downs for me for sure coming off of an achilles injury and getting that call meant a lot to me. I think, you worked your hardest to get to this, and I met my deadline to be able to play again and that was one of the things I really had on my list of things that I wanted to do so it was amazing. My billets took me out for dinner last night to celebrate and now I’ve got to make the team.”

Kinder was part of the German team that dominated in winning promotion to the top-flight at the qualifying tournament on home soil last year at this time, and being with the team as it makes the jump would take the experience a memorable step further.

As for Teply, he’s in position to build on his experience with Czech youth national teams by competing for his country in a World Championship on home soil with a tournament venue as little three hours from his hometown.

“Looking back in the past we had a couple of guys go and it’s definitely a fun tournament they always come back smiling,” said Krebs when asked about two of his teammates getting invites from their federations. “(they come back) full of new experiences, so really looking forward to seeing them down there and make their (respective) teams.”

MOTIVATED TO MAKE IT

Like Kinder and Teply, Krebs is no stranger to representing his country and can’t wait to do it again. The talented forward captained Canada’s entry in last spring’s u-18 World Championship in Sweden where he recorded 10 points in seven games for the fourth-place finishers.

“Hockey Canada does an amazing job with everything from off-the-ice to on-the-ice and I was fortunate to be the captain, we had some great players on that team and it was a lot of fun,” said the product of Okotoks, AB. “(I) wish we could have come home with the gold medal, but like I said it was a lot of fun putting the maple leaf on and I hope I can do it again at Christmas.”

There’s a fine line between pushing to be your best and pushing so hard you’re off your game, and Krebs seems to have the right approach as he looks ahead to next week’s camp in Ontario.

“You can think about it a lot, I will for sure, but I think enjoying it and just living in the moment – you don’t get this opportunity very often to play at the highest level under-20 for Canada so it’s going to be a hard camp, but I’m going to work my hardest and hopefully earn a job.”

Krebs, Kinder, and Teply suit up a few more times before leaving the city starting with tomorrow night’s 7:30 p.m. game against Swift Current at the ICE Cave inside Wayne Fleming Arena visit winnipegICE.ca for ticket information.