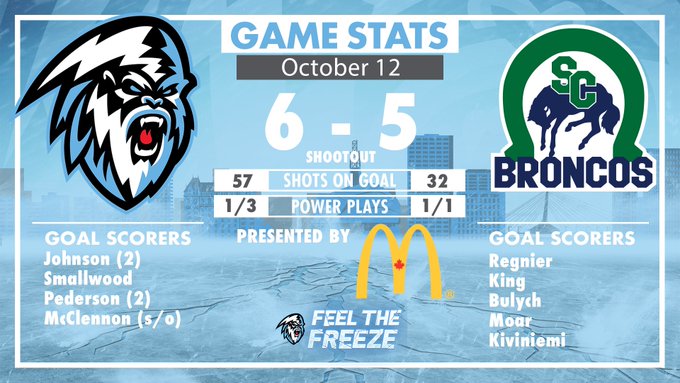 Swift Current, SK – The Winnipeg ICE came back from a 5-1 deficit to defeat the Swift Current Broncos 6-5 in a shootout on Saturday night.

The Broncos scored five unanswered goals in the opening period to take a 5-1 into the first intermission. The ICE responded with two goals from Owen Pederson and singles from Jakin Smallwood and Isaac Johnson to tie the game at five before the final buzzer sounded. Overtime didn’t solve anything and ICE forward Connor McClennon scored the only goal in the shootout to secure the 6-5 victory for the ICE.

Below is a run down of the scoresheet:

The Winnipeg ICE return home and have six days off before hosting the Saskatoon Blades on Saturday, October 19. Puck drop is scheduled for 7:30 P.M. CT.