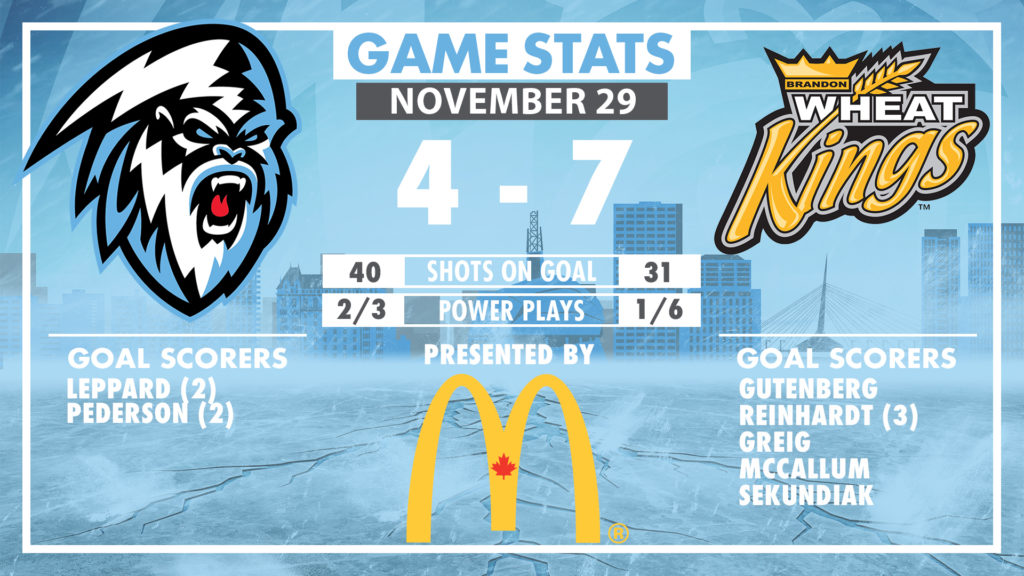 Jackson Leppard opened the scoring in this one, 8:03 into the first period.  Zloty and Johnson picked up the assists on the power play marker.  The Wheat Kings scored on their first power play chance of the night, Connor Gutenberg put in a back door feed from Greig to even the contest at 1.  Just nine seconds later, Jackson Leppard scored his second of the period to restore the one goal lead for the ICE.  Cole Muir picked up the assist on the ICE second goal.

The Wheat Kings Reinhardt got Brandon even again, 8:56 into the second period just after the ICE had killed off a Brandon power play.  Shortly after, ICE forward Brad Ginnell was awarded a penalty shot and the Wheat Kings goalie, Jiri Patera got the pad across and kept the game even at two.  Ridley Greig gave the Wheat Kings a 3-2 with 7:47 left in the second on a back door pass from Connor Gutenberg.  The ICE answered right back as Owen Pederson back-handed one in off a great rush from Mikey Milne.  The scoring wasn’t over as the Wheat Kings McCallum scored with just over a minute remaining to take a 4-3 lead into the third period.

The ICE didn’t take long to equalize the game as Owen Pederson scored his second of the night on an early third period power play.  Krebs and McClennon were credited with the assists.  Sekundiak answered back for the Wheat Kings, banging in a rebound in front of Makaj at the 8:46 mark of the third.  Reinhardt scored his second of the game just passed the midway point of the third period giving the home team a 6-4 lead. Reinhardt made it a hat trick and a 7-4 lead for Brandon later in the third.

The ICE and Wheat Kings play tomorrow night at the ICE Cave (Wayne Fleming Arena – U of M) at 7:30 PM.  The ICE will be wearing special St. Vital Minor Hockey Association jerseys and will auction them off with all net proceeds going to the SVMHA!  Tickets are available at winnipegICE.ca.