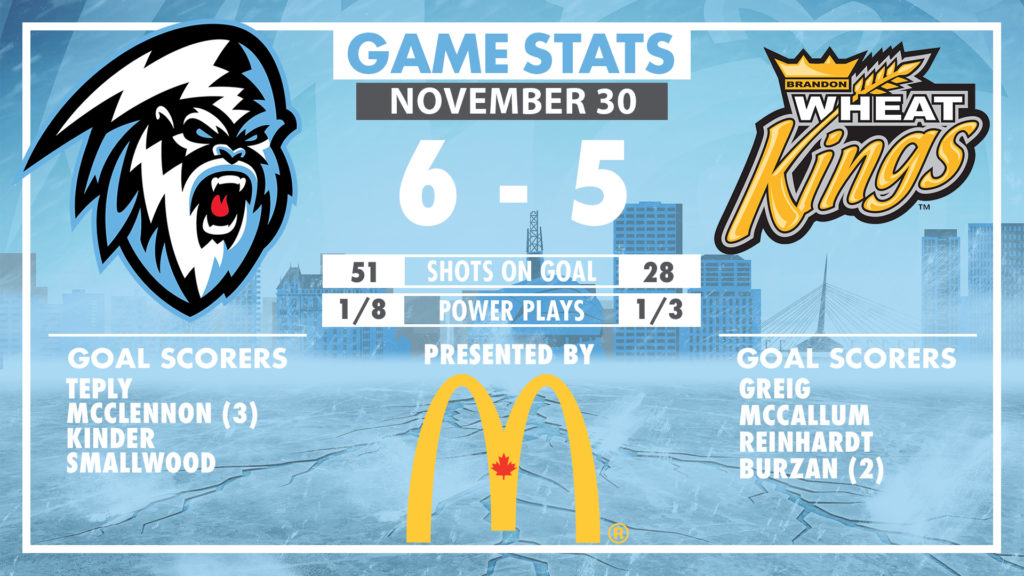 The Brandon Wheat Kings were in town Saturday night, the second game of a home-and-home series between the two teams. After a game filled with goals, fights, and special teams, the ICE came away with a 6-5 victory.

The ICE started off quickly with Michal Teply finishing off a nice pass from ICE captain Peyton Krebs less than three minutes into the game. The Wheat Kings would respond as Ridley Greig tied it up on a penalty shot at 08:16.

After two penalties late in the first period by the Wheat Kings, the ICE opened the second frame on a 5-on-3 and wasted no time capitalizing as Connor McClennon scored just 39 seconds into the period. Special Teams continued to be a theme as McClennon scored his second of the period while shorthanded, after a nice dish from Carson Lambos.

A busy second period continued as things started to get heated, with Nolan Orzeck and Jonny Hooker dropping the gloves. After a big hit by Carson Lambos, the teams came together again and a line brawl erupted that resulted in 46 penalty minutes for both teams. The teams weren’t done there as Michael Milne and Jack Zayat dropped the gloves before the period had finished. Brandon scored 3 unanswered goals to take a 4-3 lead heading into the second intermission.

The scoring continued in the third as McClennon completed his hat trick, and Nino Kinder scored his 9th of the season to give the ICE a 5-4 lead. Brandon would tie it up briefly through Luka Burzan’s second goal of the game, but Jakin Smallwood put the ICE back in front 6-5 as they held on for the win.