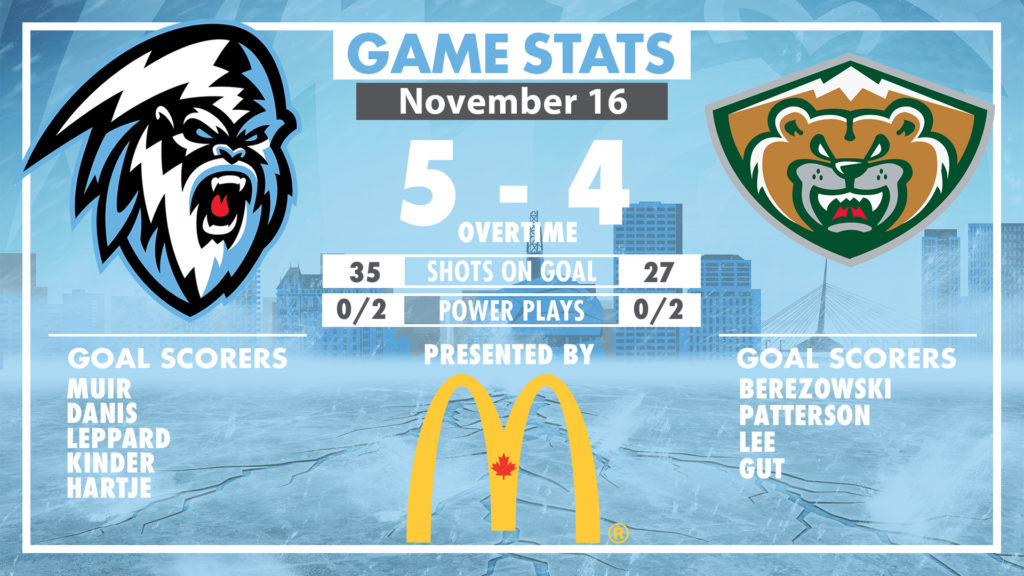 The Winnipeg ICE got a five-game U.S. Division road trip off to a winning start with a 5-4 overtime victory in Everett, Washington Saturday night.

Defenceman Chase Hartje capped a wild comeback with the deciding goal just 39 seconds into the extra-period. Fellow overager Isaac Johson had the primary assist, his third of the game.

German-import Nino Kinder tied the contest 4-4 with an extra-attacker tally with 41 seconds left in regulation-time as the ICE made their way back from 4-2 down after two periods.

Centre Jackson Leppard’s wicked shot off the rush sparked the fight back at 7:58 of period three.

The win was the first for the ICE in Everett since November 30th, 2018.

Cole Muir and Logan Danis, with his first WHL goal, struck early for Winnipeg who jumped out to a 2-0 first period advantage before the U.S. Division-leaders counted four straight.

Jesse Makaj collected the win in goal with 23 stops to improve to 5-5-0 on the season.

Winnipeg, now 11-8-1-0 overall, snapped a three-game road losing spell in dumping the Silvertips who narrowly missed out on tying a franchise record with a fifth straight win..

Next up for Winnipeg, a visit to Portland Sunday in a 7 p.m. Central start on cjob.com, winnipegICE.ca, and on WHL LIVE.