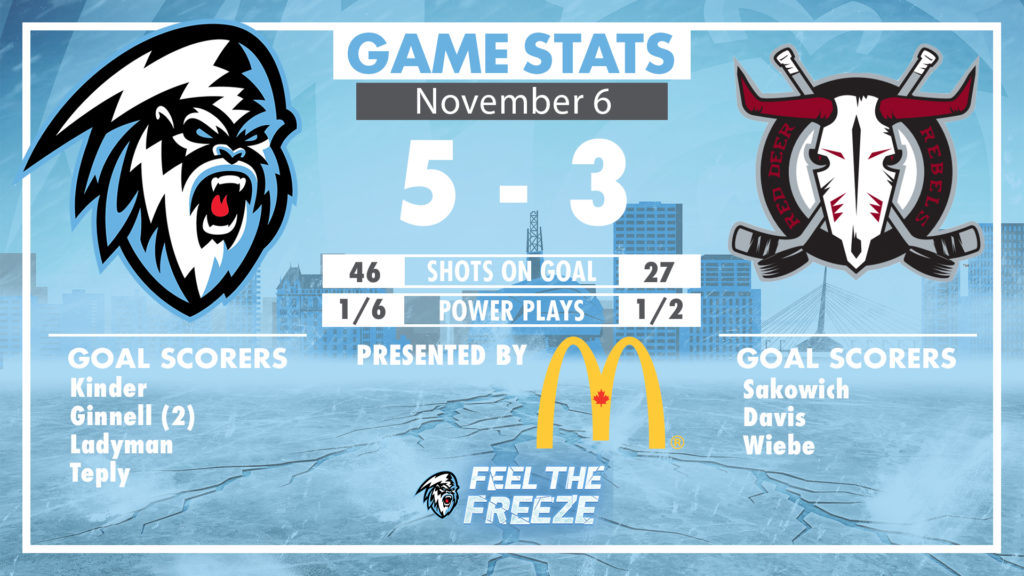 The Winnipeg ICE make it 3 wins in their last 4 home games as they beat the Red Deer Rebels by a score of 5-3 with two late goals coming in the third period.

The ICE took a 2-0 lead into the second period after Brad Ginnell scored the second goal of the period with 1 second left in the frame.

“I didn’t like how we let them hang in there” said ICE forward Brad Ginnell who scored two goals in the contest. “But the boys came through big tonight, so it was good to see”.

The two teams exchanged goals in the second period as the ICE led 3-1 after two periods. Mike Ladyman scored his first career WHL goal, and Ethan Sakowich scored for the Rebels.

The Rebels made the game interesting, as they tied the game at 3-3, after two quick goals to start the third period, with the goals coming one minute apart. The deadlock was broken at 11:31 as Michal Teply scored the GWG with 8 minutes left in the third period and Brad Ginnell got an insurance goal 1 minute later to lead the ICE to a 5-3.

The ICE hit the road as they head to Moose Jaw for a tilt with the Warriors on Friday night, before coming home to Winnipeg for a Saturday night game against the Regina Pats. Puck drop is 7:30 p.m. at Wayne Fleming Arena.