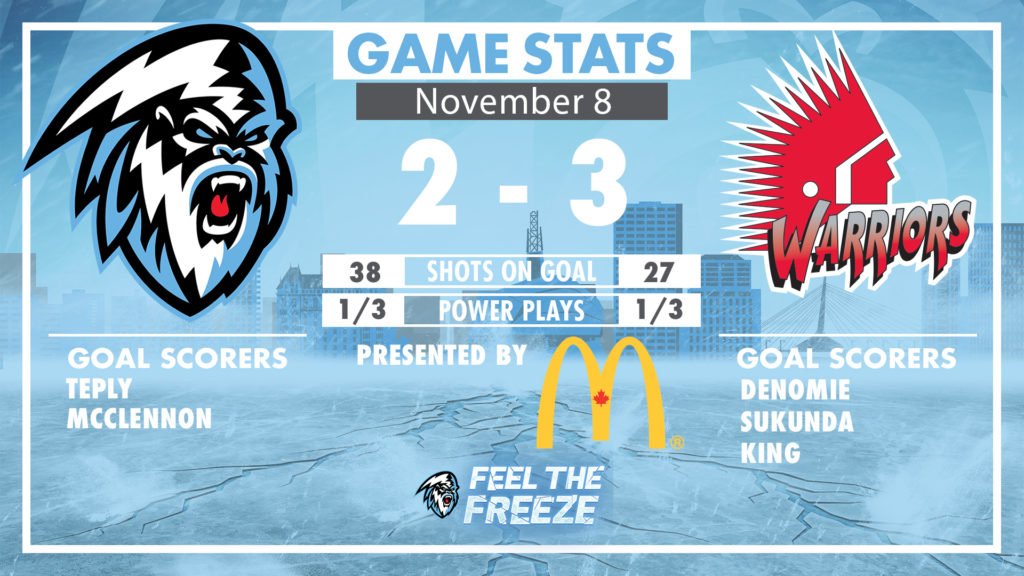 The Winnipeg ICE finished strong in Moose Jaw Friday night, but couldn’t do enough to match their season-high of three consecutive wins in a 3-2 loss to the Warriors.

Connor McClennon’s fifth of the season with 1:21 to play in the third period got the ICE within a goal, but Winnipeg’s fierce late push with the goalie out and extra-attacker on came up empty.

Moose Jaw’s Adam Evanoff made 36 saves to claim to victory. Jesse Makaj turned in 24 stops in a losing effort.

Czech import Michal Teply’s late second period 5-on-3 goal accounted for Winnipeg’s other offence. Connor McClennon finished with a goal and an assist giving him five points in the last two games (1G, 4A).

“We didn’t like our start, we were just getting out-battled in the first ten minutes,” said McClennon post-game.”Tough to give up a power play goal as we were stressing just be good on special teams, but then second period we came out good and we pushed in the third but it just wasn’t enough.”

The loss was the first for the ICE in three games after wins over Swift Current and Red Deer and leaves the team 9-7-1-0 one quarter of the way into the season.

Below is a breakdown of the scoring.

Winnipeg is home to the Regina Pats Saturday, November 9 at 7:30 p.m.on Food Drive Night in support of Siloam Mission presented by Domino’s Pizza.

For ticket information visit winnipegice.ca or stop at the ICE Box Office at Wayne Fleming Arena on Game nights.