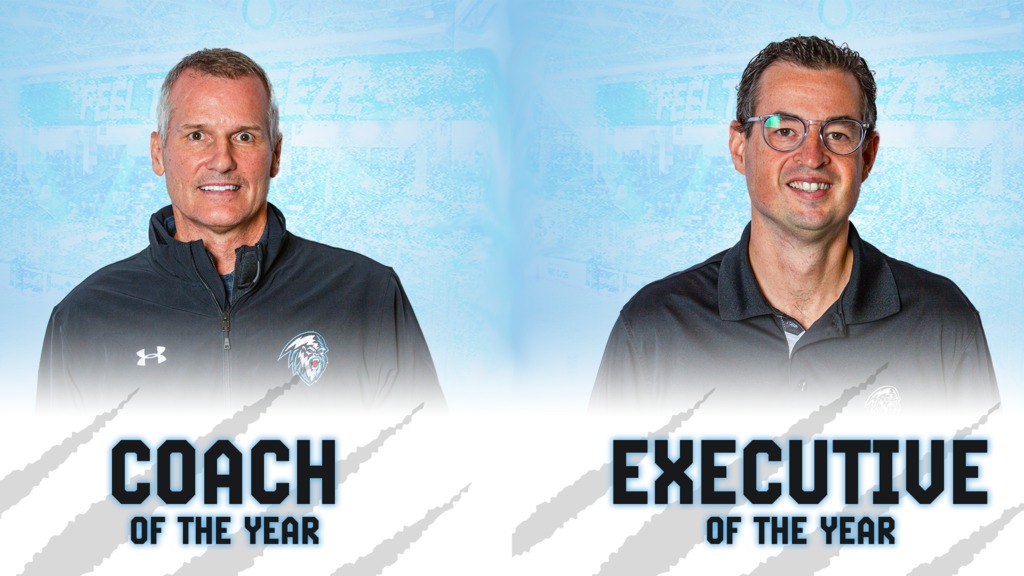 The Winnipeg ICE, in conjunction with the Western Hockey League, are proud to announce President, General Manager & Alternate Governor Matt Cockell has been named recipient of the Lloyd Saunders Memorial Trophy as WHL Executive of the Year and Head Coach James Patrick has been named recipient of the Dunc McCallum Memorial Trophy awarded to the WHL Coach of the Year.

Both awards were announced this evening during the annual WHL Awards Show broadcast live on www.WHL.ca.

Cockell and Patrick, along with Vice President of Hockey Operations and Assistant General Manager Jake Heisinger, each completed their 5th season with the ICE guiding the team to its most successful regular season in franchise history.

Cockell, 43, came to the ICE after spending over two decades with Hockey Canada, the Brandon Wheat Kings, Winnipeg South Blues and Hockey Manitoba.

He was a member of Canada’s National Women’s Hockey Team at the 2014 Olympic Winter Games in Sochi, Russia that won a gold medal. He was also a member of the Wheat Kings coaching staff that participated in the 2010 and 2016 Memorial Cup.

A graduate of the WHL as a goaltender with the Saskatoon Blades, Seattle Thunderbirds, Regina Pats and Spokane Chiefs, Cockell was selected in the fifth round, 117th overall, by the Vancouver Canucks in the 1997 NHL Draft.

Utilizing his WHL Scholarship, Cockell graduated from the University of Manitoba in 2004 with an Honors Degree in Marketing and Small Business Finance. He has served as Vice President, Corporate Partnerships for True North Sports + Entertainment and was the Chief Customer Officer at 24-7 Intouch overseeing the strategy and execution for all Sales, Marketing and Customer Experience functions.

Patrick, 58, has led the ICE to a 103-39-5-2 record over the past three seasons since relocating to Winnipeg. Prior to finishing atop of the WHL standings this regular season, the Winnipeg product guided the ICE to back to back second place finishes in the East Division standings.

Prior to joining the ICE,  Patrick spent 11 seasons in the NHL as an assistant coach with the Buffalo Sabres and Dallas Stars.

A first round draft pick, 9th overall by the New York Rangers in the 1981 NHL Draft, he played 21 seasons in the NHL with the New York Rangers, Hartford Whalers, Calgary Flames and Sabres recording 149 goals, 490 assists for 639 points in 1,280 regular season games.

On the international stage, Patrick suited up for Team Canada twice at the World Junior Hockey Championships, five World Championships, one Canada Cup and at the 1984 Winter Olympics in Sarajevo, Yugoslavia.

A Full Season Access Pass for children 12 and under is as low as $4 per game and Adult for under $17 per game. Go to www.winnipegICE.ca for details.