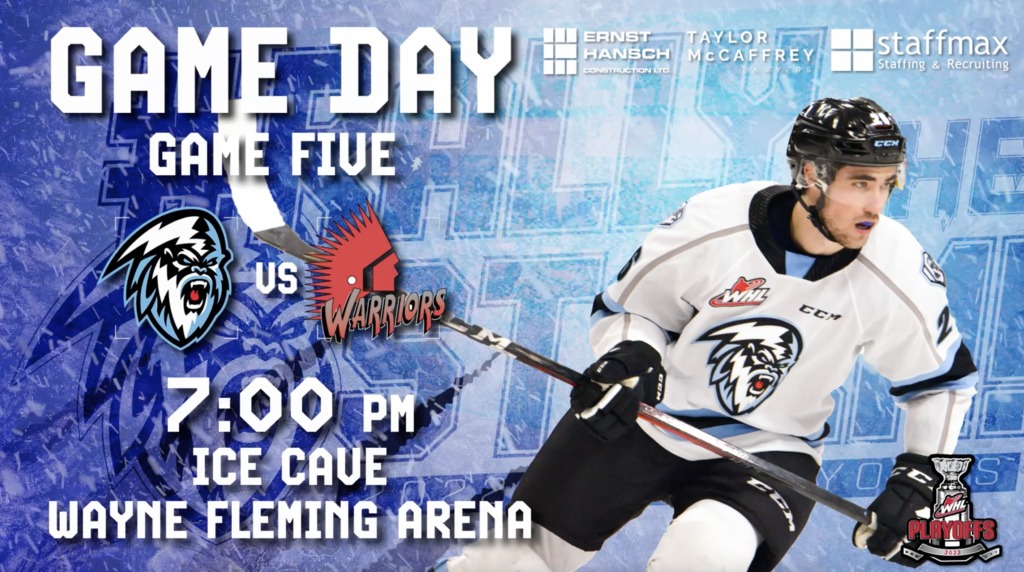 The Winnipeg ICE can advance to the WHL’s Eastern Conference Championship Series against the Edmonton Oil Kings with a victory tonight over the visiting Moose Jaw Warriors.

Entering the 2022 WHL Playoffs, the ICE had two players with WHL postseason experience on their roster. Jack Finley played 15 games during the 2019 playoffs with the Spokane Chiefs registering one goal and seven assists for eight points. Jarod Newell played one game with the Tri City Americans, also in 2019.

Nominees for the Del Wilson Memorial Trophy presented by Real Canadian Superstore, awarded annually to the WHL Goaltender of the Year:

Nominees for the Doug Wickenheiser Memorial Trophy presented by Westland Insurance, awarded annually to the WHL Humanitarian of the Year:

Nominees for the Dunc McCallum Memorial Trophy, awarded annually to the WHL’s Coach of the Year:

Nominees for the Lloyd Saunders Memorial Trophy, awarded annually to the WHL’s Executive of the Year:

Daniel Hauser, Gage Alexander and Dawson Cowan combined for 12 shutouts this season. The WHL record for most shutouts in a season belongs to the 2003-04 Kelowna Rockets when Kelly Guard and Derek Yeomans combined for 14.

Through the month of March, Hauser became just the fifth goaltender in the past 10 WHL seasons to record 11 or more wins in a calendar month. Only Andrey Makarov of Saskatoon, who won 15 games in February 2013 and Portland’s Adin Hill, who won 12 games in January 2015, had more wins than Hauser in a month. Hauser’s 11 wins equaled Seattle’s Landon Bow in March 2018 and Jordan Cooke of Kelowna in January 2013.

A 5-0 victory March 19th in Brandon clinched the East Division Championship for the ICE earning 91 points through 57 games. Winnipeg set a new season high for minutes not allowing a goal against. From March 11th in Brandon to March 18th at home against the Wheat Kings, the ICE were not scored on in 241 minutes and 23 seconds of play. On home ice, Winnipeg did not allow a goal against in 325 minutes and 17 seconds dating back to March 2nd versus Lethbridge.

WHO ENDED THE REGULAR SEASON ON A ROLL

1. Winnipeg ICE – Wrapping up 2021-22 with a franchise record of 111 points, the ICE reigned supreme for much of the season, standing atop the circuit 13 times including a 12-week run in which the club went unseated. Bringing a dynamic offensive attack, the ICE saw four players score at least 70 points led by Matthew Savoie, a projected first-round selection in the 2022 NHL Draft who headlined all WHL freshmen with an astounding 90 points.

Goaltender Daniel Hauser set a new CHL record for games started in a career without a regulation loss.

Dating back to his WHL debut March 15, 2021 versus the Swift Current Broncos, Hauser went 20-0-2 before suffering his first regulation loss January 22, 2022 in Saskatoon.

Scott Olson of the Brandon Wheat Kings previously held the WHL record at 15-0-3 through the 1977-79 seasons. The Ontario Hockey League record is currently held by Alex Nedeljkovic who won 11 consecutive games to open the 2012-13 season with the Plymouth Whalers. In 1973, Maurice Barrette of the Quebec Remparts won his opening 19 games, a mark that still stands in the Quebec Major Junior Hockey League.

ICE forwards Conor Geekie and Matthew Savoie participated in the Kubota CHL / NHL Top Prospects Game in Kitchener, Ontario.  The contest featured the top 40 eligible players in the WHL, OHL and QMJHL for the 2022 NHL Draft in Montreal.

A 3-1 loss in Edmonton October 29th saw the ICE fall one game short of tying for the longest winning streak in WHL history to start a season. The 1988-89 Swift Current Broncos hold the record of 12 straight wins before losing in Saskatoon October 30, 1988.

ICE forward Zach Benson took part in the Capital City Challenge November 26th to December 1st in Ottawa winning a Gold medal. In the Gold Medal game, Benson scored the tying goal for Team Black with 0.4 seconds remaining in regulation time to force overtime. They beat Team Red 5-4. Benson led all players in the event with seven goals and 12 points.

All regular season and playoff games, presented by Royal LePage Dynamic Real Estate, can be heard on CFRW 1290 AM and viewed online at www.winnipegICE.ca, WHL Live on CHL TV with Brian Munz and Kevin Olzsewski.