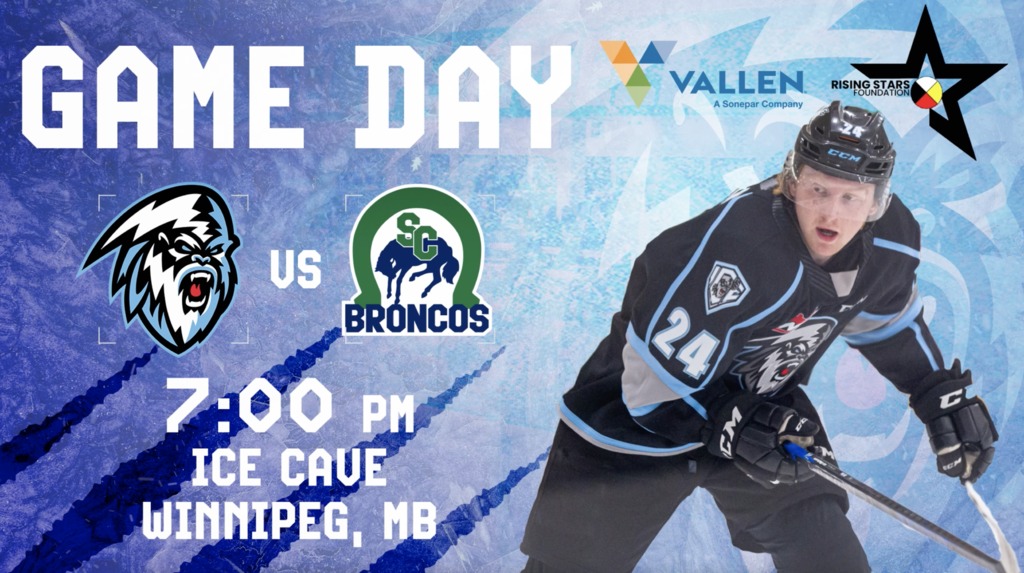 After a two game Central Division road trip this past weekend with victories in Swift Current and Medicine Hat, James Patrick’s people return to the ICE Cave inside Wayne Fleming Arena for seven straight games, starting tonight against the Broncos.

Over the next 18 days, the ICE will also host Medicine Hat and Prince Albert followed by a pair of games against both Saskatoon and Edmonton.

This is the longest homestand of the season for the ICE.

The ICE have outscored their opposition 65-17 inside the ICE Cave at Wayne Fleming Arena.

In the first meeting of the season, Winnipeg out shot Swift Current 45-19 on their way to victory.  Mikey Milne, Connor McClennon and Skyler Bruce did the scoring while Gage Alexander made 18 saves.

This past Friday, Matthew Savoie scored the game winning goal with 1:46 remaining in the third period on the power play to give the ICE a 4-3 victory.  Jakin Smallwood, Mikey Milne and a short handed goal by Connor McClennon also scored.  Gage Alexander stopped 21 shots from the Broncos.

WELCOME TO THE DUB

Defenseman Omen Harmacy, recalled today from the Winnipeg Thrashers of the Manitoba U18 AAA Hockey League, played his first WHL game November 7th with the ICE.  He was +1 in a 7-5 win over the Red Deer Rebels.

The 16 year old from Winnipeg has 11 points (two goals and nine assists) and 42 penalty minutes in 18 games with the Thrashers this season.  The 5’9”, 170 pound blue liner was selected by the ICE in the eighth round, 168th overall in the 2020 WHL Bantam Draft.

Forward Ty Fraser from the Lethbridge Hurricanes U18 AAA team of the Alberta Elite Hockey League made his WHL debut Saturday night in Medicine Hat.  He registered two shots on goal in a 4-2 victory.

In 13 games this season with the Southern Alberta Hockey Academy, Oiring has 12 goals and nine assists for 21 points and 18 penalty minutes.  The 5’7”, 164 pound forward was selected by the ICE in the third round, 58th overall in the 2020 WHL Bantam Draft.

A 3-1 loss in Edmonton October 29th saw the ICE fall one game short of tying for the longest winning streak in WHL history to start a season.  The 1988-89 Swift Current Broncos hold the record of 12 straight wins before losing in Saskatoon October 30, 1988.

All regular season and playoff games, presented by Royal LePage Dynamic Real Estate, can be heard on CFRW 1290 AM with Brian Munz and Kevin Olzsewski.